You are visiting this website with an outdated version of Internet Explorer. In order to browse our website, we recommend that yo use a different, more current browser like Chrome or Firefox.
[x]
Call Us Live Chat Get a Quote
FREE SHIPPING TO LOWER 48 STATES ON ORDERS OVER $99!
Back 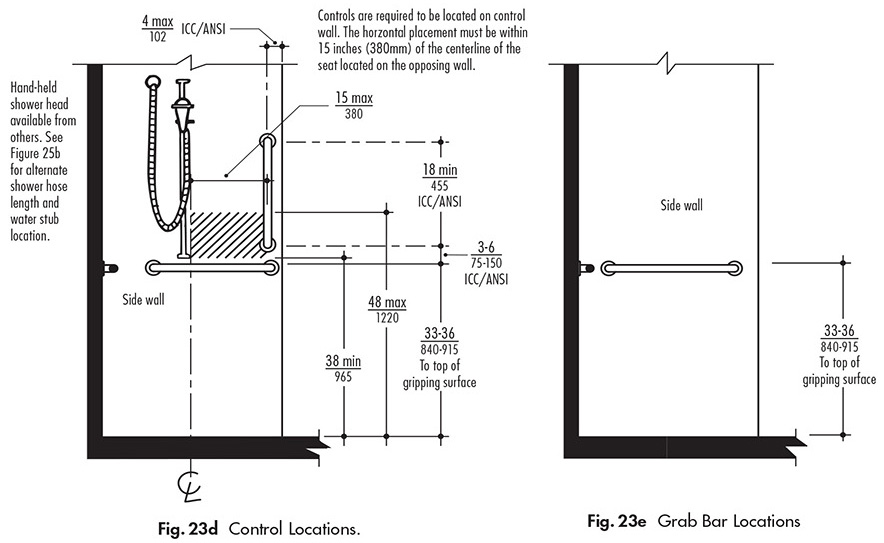 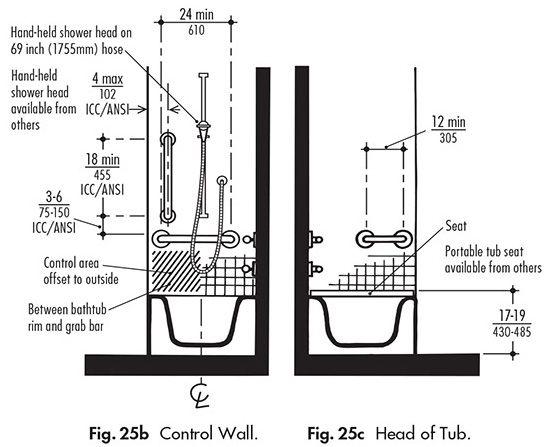 SHOWER HEADS in accessible bathing facilities must be usable in a fixed position as a hand-held model with a 59 inch (1500mm) minimum long hose (Figs. 23d, 24b). To allow for easier manipulation of the shower unit, it is recommended that a longer, 69 inch (1755mm), hose be used (Fig. 25b). An optional vertical slide-bar with a recommended length of 36 to 40 inches (915 to 1015mm) will allow the spray unit to be used as a fixed shower head at various heights (Fig. 25b). Where a slide bar is used, an alternate location for the water union is 12 to 16 inches (305 to 405mm) above the horizontal grab bar to allow for a longer reach for the hand-held shower (Fig. 25b). The accessibility standards allow an exception: A fixed shower head mounted 48 inches (1220mm) above the finish floor may be installed in lieu of a hand-held unit in facilities that are not medical care facilities, long-term care facilities, transient lodging guest rooms, or residential dwelling units.

SOAP DISHES are normally placed on the same wall as the shower head and controls where they are least likely to collect standing water. It is recommended soap dishes be recessed and mounted 38 inches to 48 inches (965 to 1220mm) above the finish floor when installed in shower compartments, or they should be mounted between the grab bar and the rim of the bathtub (Figs 23d; 24b, 24d, 24e; 25b).

SHOWER CURTAINS generally work well as enclosures for all users including people who use wheelchairs. If other types of shower enclosures are used, they should fold back completely out of the way so as not to obstruct transfer to shower seats or interfere with controls, and they must not incorporate a track along the floor or the rim of bathtubs. 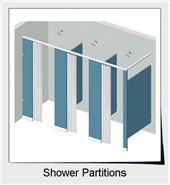 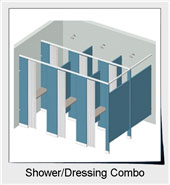 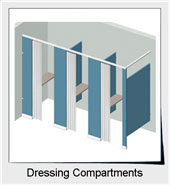 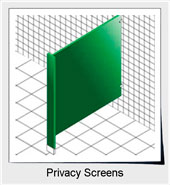 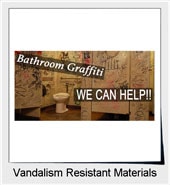 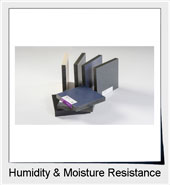 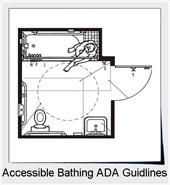 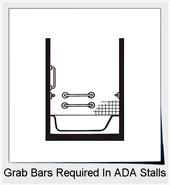 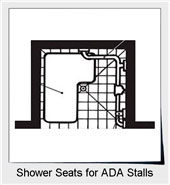